I and Franz are thankful for God guidance as He kept us along to celebrate our 3rd Anniversary. The original plan was to go to Palawan. We have already booked our plane tickets DVO-MNL-PALAWAN and we are ready to go. However, before our anniversary a much more important blessing came along to me. I was offered a promotion and should transferred to Manila as the position requires. It might be more difficult for us but both of us decided to go along with a longer distance relationship and prove we can get it through.

So, we decided to have it in Metro Manila and went to the nearest weekend getaway – Tagaytay and try a new adventure –  Food Tour for the very first time in the famous food hubs like Maginhawa Street in Quezon City and Binondo, Manila. I also toured him around the vicinity of where I stay in Taguig, in my workplace in Bonifacio Global City and around Makati. (Luckily, I got 2 day compensatory leaves for working during weekends so my boss allowed me to use it for extended birthday/anniversary celebration.)

And we are ready set go! 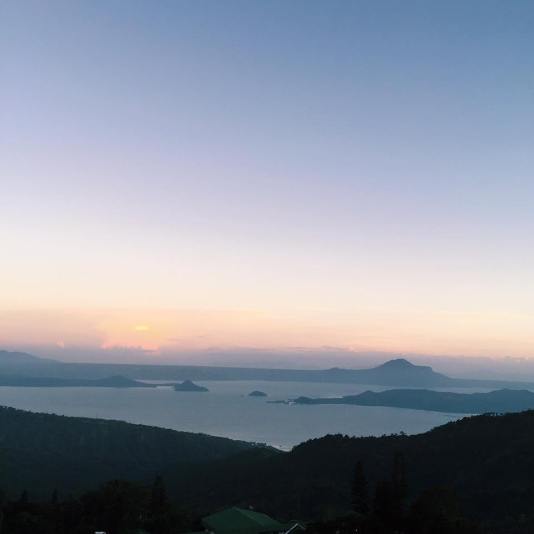 Just in time to witness the sun sets in Tagaytay. So beautiful.

It was a day full of excitement that it was the first time I will fetch my boyfriend in the airport. (It was his first time to fly alone.) His flight was a bit of delayed that I didn’t know so the anticipation was longer. ♥ Nevertheless, he arrived around 11:00 am. We hop on a taxi to go to Coastal Mall where we can ride a bus to Tagaytay.

For approximately 2 hours, we arrived in Tagaytay and had a quick lunch at Andoks. After having lunch, we went to our hotel at Destination Hotel. We decided to get much more expensive hotel to have an overlooking view of Taal Lake.

The view, the weather and the person I am with were just a perfect combination!

We rested for a little while and prepared for the Sky Ranch adventure. Around 6pm, we rode a tricycle going to Sky Ranch. 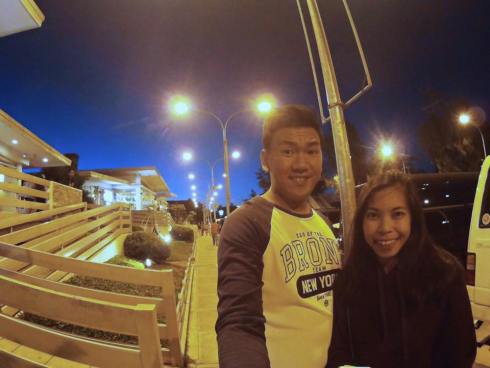 We took this picture and paid P20.00 afterwards. We thought it was free. Haha!

We tried the Sky Eye (the ferris wheel), and rode a carousel as if we are kids.

Around 7:30pm, we went out for dinner to taste the famous Bulalo in Tagaytay. We searched for the cheapest bulalo we can have. Unfortunately, the cheapest are available at the market, but it was already closed. So we went at Don Juan which is just along the main road.

The warm bulalo was just too perfect for the cold breezy evening.

We ordered Bulalo and Sisig. After we had dinner, we went back to the hotel.

We decided to go out to roam around Tagaytay early morning, so we can go back at the hotel before check-out time.

Catching the sun rise in this picturesque view.

First stop is People’s Park in the Sky. The trip going was a bit long but it was worth it as we had a chance to gaze upon the beautiful scenery of the mountains and the lake along the way. Upon arrival, thick fog welcomed us. I bought strawberry taho because it is my first time to taste it. It was a challenge going uphill against the fog and cold wind. But we were able to manage it.

After 30 minutes, the fog already subsided and downtown  was already visible from the peak. So much of a beauty.

We then proceeded to the next stop – Picnic Grove. We had a better view of Tagaytay and Taal Lake. There are so many things to go in Picnic Grove like zipline, zoo tour, and so much more.

We arrived at Maginhawa St. 11:30 am, just in time for lunch. We are so hungry to prepare our tummies for extreme food attack.

First stop is Rodics where we tried Tapa and Beef Caldereta. I knew Rodics because it was featured in Kris TV and been talked about in so many blogs. So we give it a try.

The tapa was so perfect! The caldereta was something I did not expect to love. It was spicy just the way I want it.

Second Stop is Crazy Katsu where we tried their best selling Chicken Katsudon. It’s my second time to try Crazy Katsu. First was with Franz’s sister. But I always crave for it.

And according to Franz, it was the way he wanted for a Katsudon! Spicy and savory!

Third Stop is Iscreamist where we enjoyed the liquid nitrogen a lot. It was so much fun for a dessert.

Dipping the smores unto the liquid nitrogen made us feel like ignorant kiddos.The mango nutella dessert was so yummy and delectable.

Fourth Stop is the Burger Project where we tried Sloppy Joe. It is a DIY burger where you choose your own burger patties, sauce and everything you would like your burger to have. We just got whatever is suggested. (We were too sleepy then because we had so much food already.) 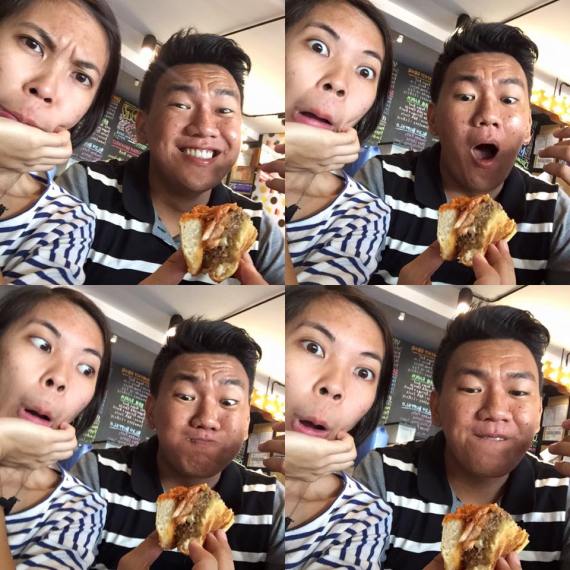 Franz enjoyed the burger because it was his favorite. I was taking slight naps  while we was busy munching it.

Fifth Stop is at Mom and Tina’s. It is located in front of ABS-CBN. I knew Mom and Tina’s back then when I first visited ABS-CBN but never got a chance to try it. Until I also watched in Kris TV. We should have only check out ABS-CBN but then I wanted some cupcakes. So there!!

The cupcakes are too perfect! I’ll be back soon to try their pastas. The place is too homey which I liked the most.

Franz and I have so much love for Japanese and Chinese food. So we decided to try Binondo Food Tour. Same scenario, we arrived their just in time for lunch and we were so hungry.

Their noodles were something we craved for until now. For only P140. We were so satisfied.

Second Stop at Quan Yin Chai, the vegetable restaurant.The experience was funny because everything was vegetables. We thought there are a bit of pork or chicken. But there was nothing. We didn’t finish our food. We gave it to a mother outside the restaurant. 🙂 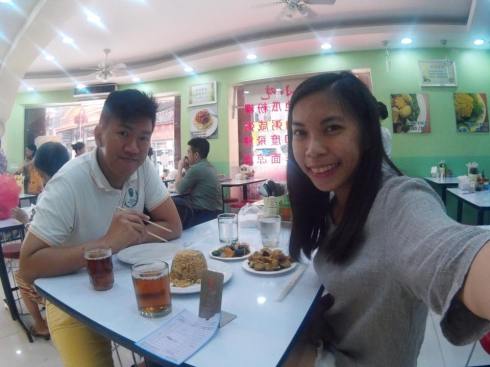 Third Stop is Dong Bei Dumplings, where we tried Dumplings. We were excited then. There’s a lot to eat for the two of us. The first try were so okay. Until we badly need to finish it.

After Binondo, we went to Makati and went to Greenbelt.

Sixth Stop, we tried Conti’s cakes. I told Franz that I wanted to eat cake, so we tried Mango Bravo and Double Chocolate Cake.

And at night, it was so timely that Ayala Triangle has been ready for the music and lights show for Christmas. It was truly amazing and magical. Franz really enjoyed dancing while taking videos of us.

We had our dinner at Chef Lau’s Roasters and went home.

Here are all the food we took in our tummies for the 4 days. Jaw-dropping!!! haha!

To recap, 1st Anniversary was in Davao (Mindanao) – the Mountain to Shore experience, you can check it out here (Part 1) and here (Part 2). For our 2nd anniversary, it was in Cebu and Bohol (Visayas), check out my post here. And for our 3rd Anniversary in Metro Manila (Luzon), you can check out Itinerary for Tagaytay and Metro Manila Food Tour here. 🙂 . So are you guessing where we are off to our next anniversary?